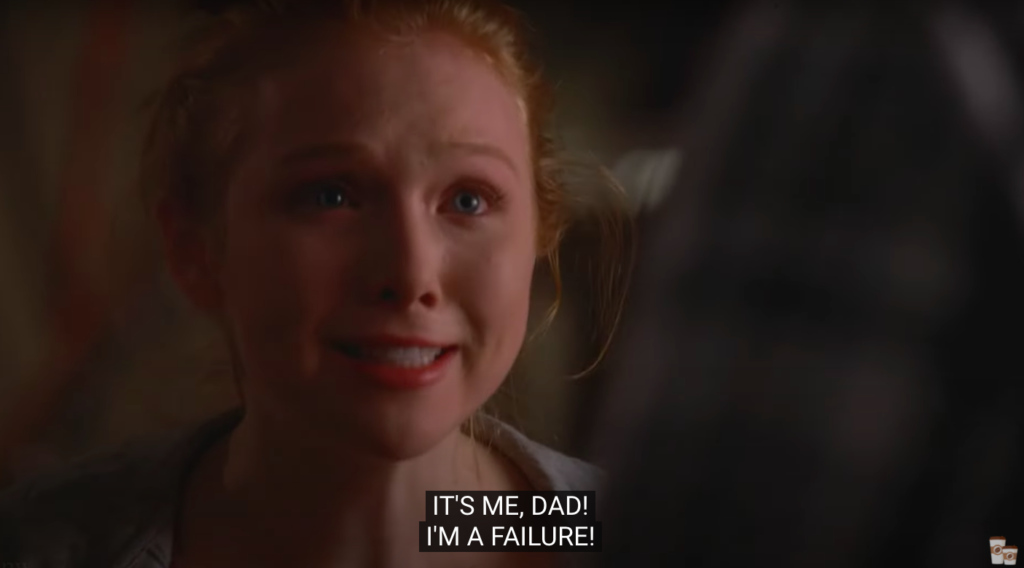 Today I want to talk about failures.

I can still vividly recall one particular scene in my favorite TV series “Castle”. Castle is the name of the main character, Richard Castle, a best-selling mystery novelist. He has a daughter named Alexis who seems to be a perfect girl: typical straight-A student, really smart, mature, responsible,…you name it. One time she got rejected by her dream university. She was so sure about getting in. She had done everything required: impeccable school records, impressive extracurricular activities, and …well, to be honest, I am not sure what else she has done but it appeared that she had done everything right.

As you can imagine, poor Alexis felt terrible about the event. This was the first time she ever got rejected. She NEVER got rejected. Unable to cope with her very first rejection, she planned to get rid of all of the awards and trophies she had ever gained. When her dad tried to stop her, she literally screamed out loud “I’M A FAILURE!”. All of the accomplishments she has ever achieved didn’t matter because they didn’t bring her to her ultimate goal: getting accepted by Stanford. Castle sighed and thought he might have overprotected her, to the point that she could not handle rejection. However, he gave her some space to figure things out herself. 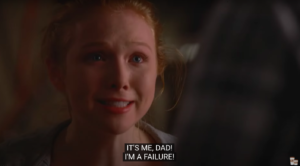 A few days later, Alexis discovered something in her dad’s office. It’s a letter framed and hung on the wall in his office. Before revealing what kind of document it is, I want to ask you a question: What kind of papers would you frame and hang on the walls in your home/room? It should be something that makes you proud and feels good about yourself? Well, I am no different. I hung the 1st-place award ribbon that I got from a singing contest in university on the wall. I was so proud. And I am still proud of myself until this day… Okay, I hope you’re still with me. Let’s go back to Mr. Richard Castle’s story before I start rambling on again. To Alexis’s surprise, the framed letter hung in her dad’s office is a rejection letter. It’s Castle’s first manuscript rejection letter, followed by 20 more letters before he got his first published work. He then explained that that letter drove him and gave him more motivation. This is his famous quote:

“Rejection isn’t failure. Failure is giving up. Everybody gets rejected. It’s how you handle it that determines where you’ll end up.” 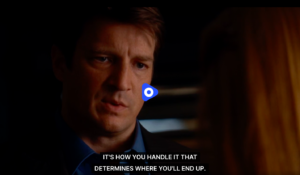 I know it is a movie. But it hit me pretty hard. We are brought up in a society that detests and undermines failures. We are ingrained with the notion “failures are bad”. That if we fail, we are unworthy. That if we fail, we should keep it to ourselves. We all publicly or secretly admire the successful people that we know. By “successful people”, I mean the people you think are successful based on YOUR definition of SUCCESS, because we have different definitions of success. And this seems to be an unwritten rule that most people follow: We should wait until we actually succeed in something to be able to share our experience. Who wants to hear stories from an unsuccessful person? We feel ashamed of our failures. But if you think about it, most considered successful people have failed at some point. And I believe they didn’t fail once. It was a series of failures that led them to who they are today. Of course you heard them talk about their setbacks in interviews. But is it true that only successful people are entitled to talk about this subject?

Some people are so afraid of failures that they do not even bother trying in the first place. It can be learning a new skill, joining a contest, looking for a new job, finding a lover, or following your dream.

I want to break that toxic notion today by telling you my failure story. In a proud manner.

People who know me well would probably know I love writing. The truth is, I dreamed about becoming an author when I was a six-year-old kid. Writers are my superheroes. I admire and respect them so much. 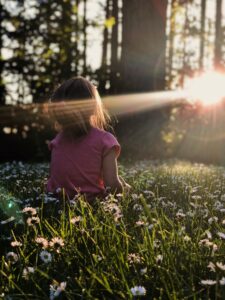 I wrote my first short story when I was 13. We didn’t even have a computer back then so I just painstakingly wrote my story on the student notebook’s pages. It’s about the friendship between a boy and a girl. A typical teenage romance story, except for the fact that the boy later died of cancer. My source of inspiration didn’t come from the Korean movie motifs that were mainstream in the 90s, but from a true event: a boy I secretly had a crush on in elementary school died of bone cancer. Needless to say, I poured my heart and soul into that story. I sent the original manuscript to The Red Scarf Magazine, a popular publisher in Ho Chi Minh city, waited patiently for weeks, but never heard back from them. Not making a copy of the story is probably my biggest regret in life. That is my first failure in writing. And I have to be truthful with you, I got bitter about it and stopped writing fiction for a while. Well, for 18 years.

I just finished my second short story this year. At 31. But nothing has brought me more joy than living my childhood dream again. It all started with a Facebook ad about a Creative Writing Class. As it was something I always wanted to learn, I took my chance and signed up immediately after checking my schedule to make sure it wouldn’t conflict with my other projects. It took me almost 5 months to draft, build, and perfect “The Dreamwalker”. After it’s finished, I excitedly sent the story to a few close friends and received some positive feedback. Then I proceeded to the next steps: send it to a few publishers that may be interested. I sent it to around 4 different publishers and a writing contest. Already got 2 rejection letters. And haven’t heard from the rest. 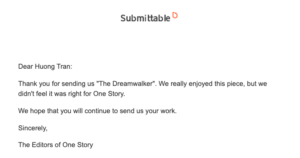 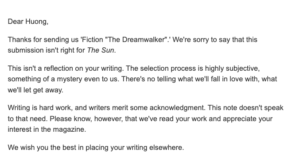 Somehow I feel completely at peace with my “failure” this time. Indeed, I feel very proud of myself for making an effort to do what I love, nurture my soul, and improve my skills. Although writing wasn’t easy at first and could cause frustration at times, I find it rather therapeutic. And I can see an improvement in coming up with ideas and words as I continue to write. Additionally, I got a chance to meet the kindred spirits, people who love writing just like I do. I feel like I have finally found my “tribe”, a place I can fit in and belong to. 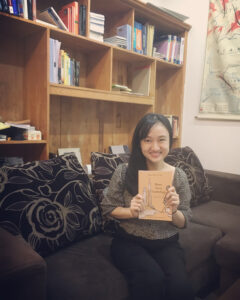 Keep experimenting and following your calling. Learn from your mistakes. Refine and perfect your crafts. And as long as you are still breathing, keep trying. 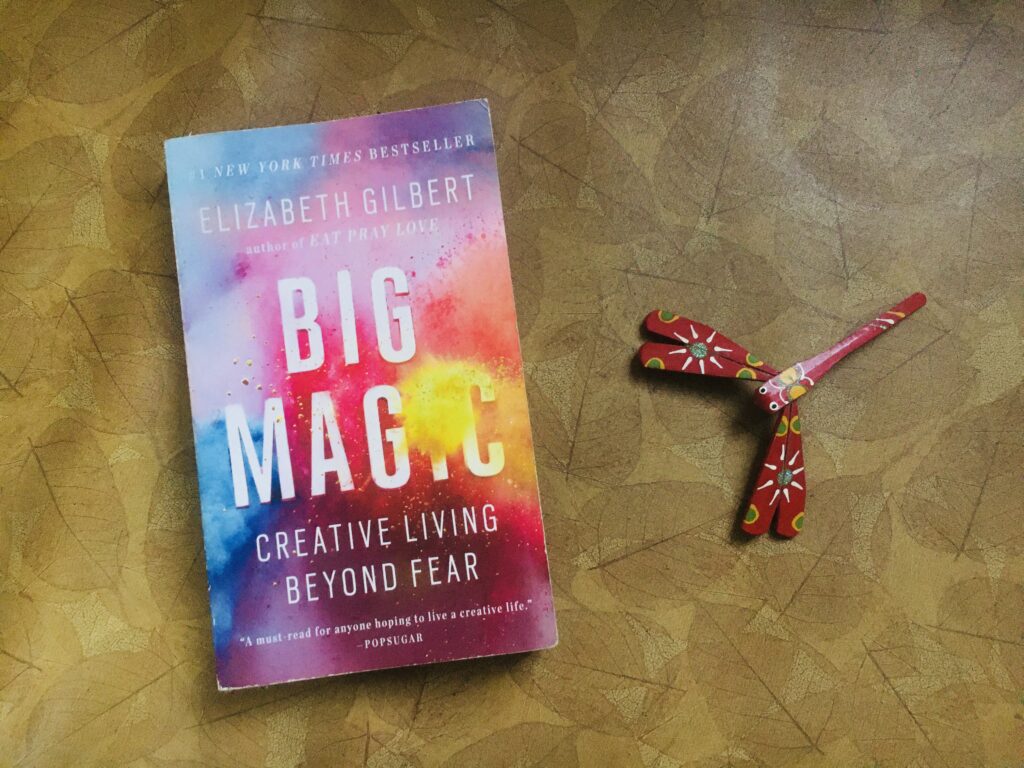